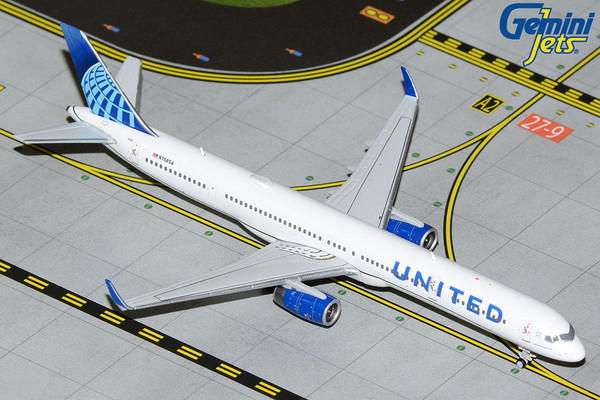 GeminiJets 1/400 scale United Airlines Boeing 757-300 diecast metal model is As Real as it Gets and measures approximately 5-3/8-inches long with a 3-7/8-inch wingspan. Manufactured as an officially licensed product by GeminiJets as a limited edition, highly collectible model, this United Airlines Boeing 757-300 - Registration N75854 - has been meticulously recreated from Boeing's blueprints and features realistic landing gear and detailed printed graphics, assuring the utmost accuracy and superior quality. A Display Stand is not included and is sold separately - Gemini GJSTD777.

The Boeing 757-200 was originally designed to replace the venerable Boeing 727-200, whose twenty-year-old outdated design was sorely in need of updating. At the time, the airlines needed an aircraft with a moderately higher passenger seating capacity, yet the new airplane had to be economically superior to its predecessor.

With the first two launch customers - Eastern Airlines and British Airways - having placed orders for the new aircraft, the 757-200 became a reality. The prototype aircraft was initially flown on February 19, 1982, and, upon having completed its certification, the first 757-200 was launched into service by Eastern Airlines on January 1, 1983.

Although originally delivered with Rolls Royce engines, some airlines opted for Pratt & Whitney powered aircraft, which both proved to be popular with their respective customers. The 757-200 has demonstrated itself to be one of the most fuel-efficient airliners ever built, with its Revenue Seat Mile (RSM) recognized as the best in the industry.

Condor Airlines, of Germany, was the launch customer for the stretched Boeing 757-300 that went into service in early 1999, noting that the 757-300 is the longest single-aisle twin-engine aircraft ever built.