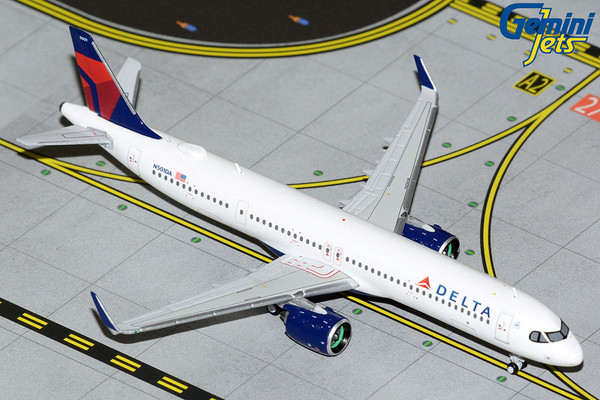 GeminiJets 1/400 scale Delta Airlines Airbus A321neo diecast metal model is As Real as it Gets and measures approximately 4-3/8-inches long with a 3-1/2-inch wingspan. Manufactured as an officially licensed product by GeminiJets as a limited edition, highly collectible model, this Delta Airlines Airbus A321neo - Registration N510DA - has been meticulously recreated from Airbus' blueprints and features realistic landing gear and detailed printed graphics, assuring the utmost accuracy and superior quality. A Display Stand is not included and is sold separately - Gemini GJSTD777.

Following the success of the Airbus A319, A320 and A321 aircraft, Airbus embarked on an enhanced variant of the original series with a new line of aircraft, which it named the A319neo, A320neo and A321neo. The designation, "neo," which stands for "New Engine Option," features updated, more efficient engines in addition to aerodynamic improvements for better performance, which have resulted in a fuel burn savings of 15% along with lower operating costs and less noise over the previous aircraft.